Cerny overall winner of the Tour of Slovakia 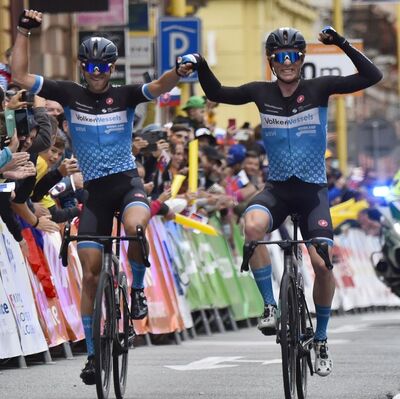 Team VolkerWessels celebrates double success at the end of the Tour of Slovakia with Jasper Haest (right) and Peter Schulting | Photo: Cor Vos

09/17/2022 | (rsn) – Josef Cerny (Quick-Step Alpha Vinyl) did not let the overall victory in the Tour of Slovakia (2.1) go. The Czech arrived with the peloton on the last day of the 182 km section that ended in Kosice and, thanks to the bonus seconds, extended his lead over his teammate Mauri Vansevenant and Dutchman Koen Bouwman (Jumbo – Visma) to six seconds.

The opponent from the Netherlands won the day. Jasper Haest (VolkerWessels) beat his teammate Peter Schulting. Both crossed the finish line holding hands and congratulating each other.

“We pulled through until we had 500 meters to go. We both wanted to win and then decided to settle it with rock, paper, scissors. And that’s where I won,” Haest, who secured the points classification, said after the race. .

Dane Michael Morkov (Quick-Step Alpha Vinyl) decided to run the field in his favor by 13 seconds. Italian Filippo Fortin also showed interesting works. The captain of Maloja Pushbikers finished fourth in the field sprint, which was enough for sixth place in the daily classification.